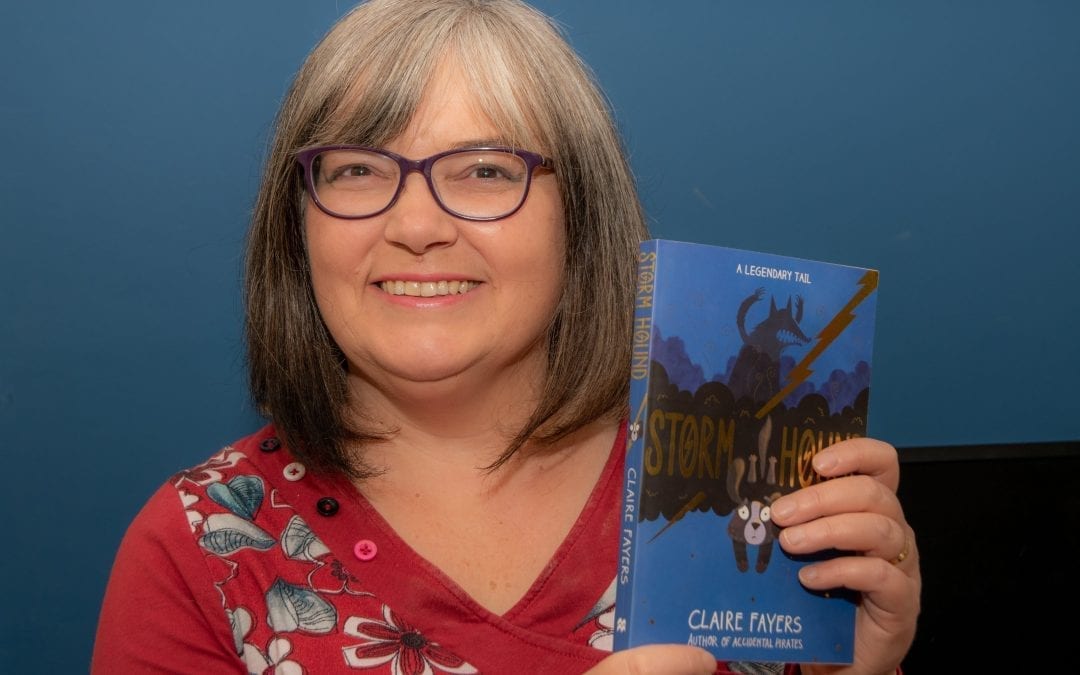 Storm Hound was one of four books with an authentic Welsh background shortlisted for the prestigious award for children’s and young people’s literature, which is organised annually by the Books Council of Wales.

The announcement of the winning title was made live on the Radio Wales Arts Show on Friday 3 July 2020.

Speaking about her win, Cardiff-based Claire Fayers said: “I am thrilled to have won this year’s Tir na n-Og English-language award. I have been reading books from the Tir na n-Og shortlists for as long as I can remember. They represent the best of Welsh literature for children and young people, so to actually win is an immense honour.”

Storm Hound (Macmillan Children’s Books) tells the story of Storm of Odin, the youngest stormhound of the Wild Hunt that haunts lightning-filled skies. He has longed for the time when he will be able to join his brothers and sisters but on his very first hunt he finds he can’t keep up and falls to earth, landing on the A40 just outside Abergavenny. Enter twelve-year-old Jessica Price, who finds and adopts a cute puppy from an animal rescue centre. In an electrifying adventure, she soon starts to see that there’s something different about her beloved dog.

The Chair of the 2020 Tir na n-Og English-language judging panel, Eleri Twynog Davies, said: “Congratulations to Storm Hound – a magical story, with strong themes of friendship and belonging. The characters were wonderfully developed and presented us with moments of humour and poignancy.

“All four books on the shortlist had their stories set against a Welsh background, where a sense of place contributed to the their overall appeal. This is one of the central criteria for this award, and one which we as judges felt was lacking in many of the other entries. It is so important that the children of Wales can see themselves reflected in Welsh literature, and that children outside Wales have a window on another culture.”

The three other titles shortlisted for the 2020 Tir na n-Og English-language award were The Secret Dragon by Ed Clarke (Puffin), Max Kowalski Didn’t Mean It by Susie Day (Puffin) and Where Magic Hides by Cat Weatherill (Gomer).

Helgard Krause, Chief Executive of the Books Council of Wales, said: “Instilling a love of reading in our children and young people is incredibly important. Not only does it help develop their knowledge and literacy skills, it also supports their mental health and well-being. The Tir na n-Og Awards help celebrate great writing for the younger generation and ensure that stories with a distinctive Welsh setting are represented in the best of our country’s literature. Our sincere thanks and congratulations to all involved in this year’s awards, but particularly today to Claire Fayers.”

Amy Staniforth from CILIP Cymru Wales, which sponsors the Tir na n-Og Awards, said: “After such a difficult few months for everyone, CILIP Cymru Wales are just delighted to congratulate Claire Fayers on winning this year’s Tir na n-Og English-language award. We know that librarians all over Wales will be excited to be able to share Storm Hound with their users via their click and collect services.”

Nicola Heywood Thomas, presenter of the Radio Wales Arts Show, said: “New writing for children and young people is so important to fire their imagination and to get them hooked on books. Great stories have an impact that can stay with readers throughout their lives. This award showcases the brilliant range of talent in Wales. Congratulations to all involved.”

Claire Fayers was presented with a cheque for £1,000 and a specially commissioned poem by Children’s Laureate Wales Eloise Williams.

The winners of the Welsh-language categories of the 2020 Tir na n-Og Awards will be announced on S4C’s Heno programme at 6.30pm on Friday, 10 July.