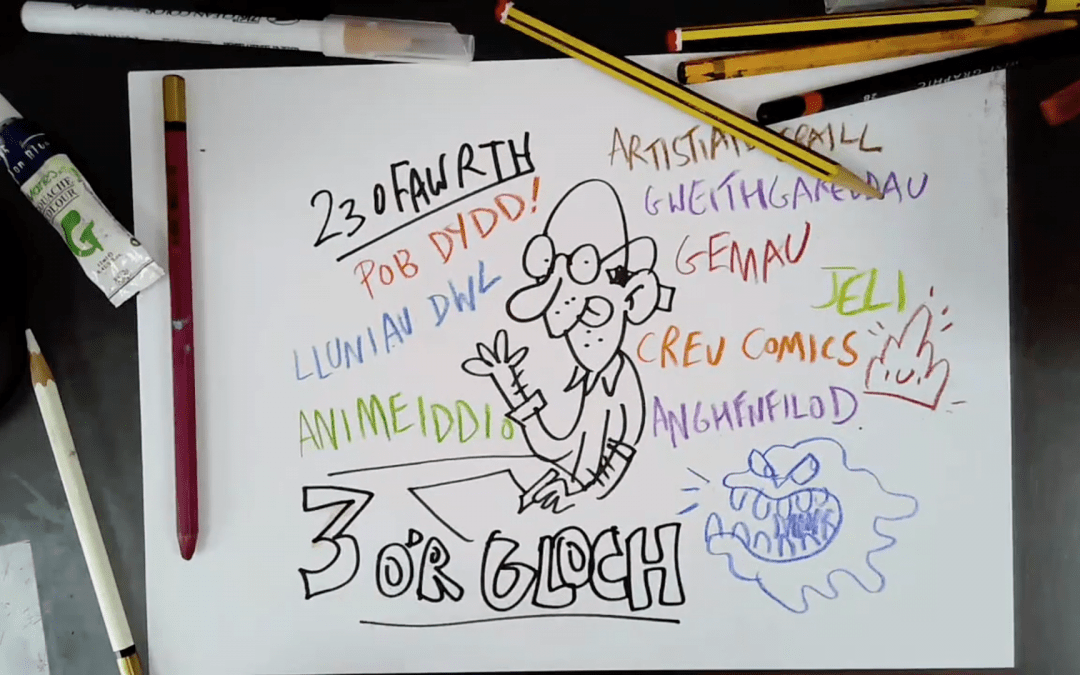 A series of online art sessions for children by one of Wales’ leading cartoonists has been viewed more than 30,000 times since it was launched at the start of the school closures due to Coronavirus.

A series of online art sessions for children by one of Wales’ leading cartoonists has been viewed more than 30,000 times since it was launched at the start of the school closures due to Coronavirus.

Every weekday afternoon at 3 o’clock, Huw Aaron hosts a live session or uploads a video to YouTube showing how to draw comic pictures or cartoons, and how to tell a story through pictures.

Now all of his videos are available to watch in one place on the Urdd’s website, which also offers a range of activities on its urdd.cymru/criw pages.

Huw sets a daily challenge for children and creates activity sheets linked to the videos so that viewers can continue to develop their skills offline.

The Welsh-medium service was launched on Monday 23 March 2020 following the Welsh Government’s decision to close school temporarily due to the pandemic.

More than 30 free videos have now been shared online and viewed more than 30,000 so far.

Commenting on his Criw Celf channel, Huw Aaron said: “As a cartoonist and children’s book illustrator, I’ve learned a few things about how to draw, and I thought it would be fun to share some of this with a wider audience. These short daily videos are an opportunity for children (and their parents!) to enjoy a fun activity through the medium of Welsh, and hopefully learn some new skills along the way.

“The response has been really lovely and encouraging – with many joining to draw together and to proudly sharing their work on social media. So pick up a pencil and a piece of paper, and join the #criwcelf – whatever your age!”

The daily sessions (Monday-Friday) are supported by Urdd Gobaith Cymru and the Books Council of Wales.

The Head of Grants at the Books Council, Arwel Jones, said: “In these troubled times, we need to think imaginatively about how to entertain – and educate – children at home. Huw’s talent for drawing and exuberance attracts a daily audience and we are very grateful to him for creating high quality content that is valued by children, parents and carers alike. Digital content of this kind is particularly important at a time when it isn’t possible to print hard copies of traditional magazines like Mellten and Cip.”

The Criw Celf series forms part of the Urdd’s online resources for children and is widely shared on their social media as well as on the Books Council’s channels.

Mari Williams, the Urdd’s Communications Manager, said: “Huw Aaron is already a lively contributor to the Urdd’s magazines and we are delighted to be able to support these digital workshops which are freely available to anyone. They are a great resource, and clearly attract and entertain children young and old over this period.”

Huw Aaron will continue to host Criw Celf live sessions on YouTube in the coming weeks and all of his videos are now available to watch on the Urdd website urdd.cymru/criw.