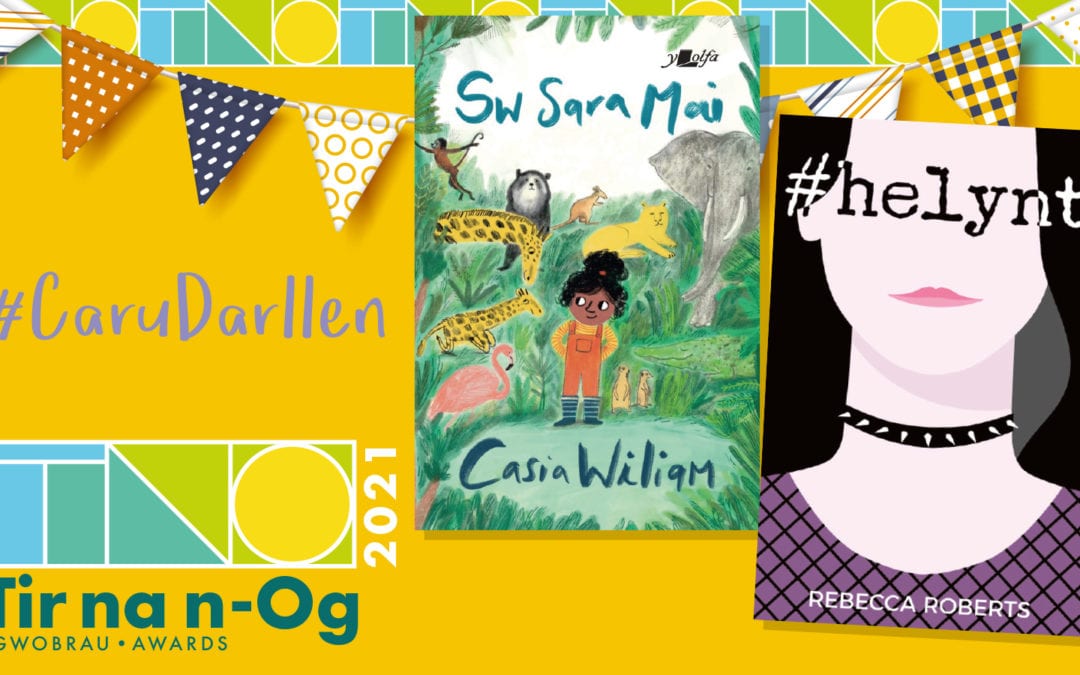 Modern-day stories about the bravery of two girls who find themselves in very challenging but very different situations have triumphed in the Welsh-language categories of the prestigious Tir na n-Og Awards 2021 for children’s and young people’s literature.

The titles of the winning books were announced on S4C’s Heno programme at 19:00 on Thursday, 20 May. The two authors receive a cash prize of £1,000 each as well as a specially commissioned poem by Bardd Plant Cymru (Welsh Children’s Laureate) Gruffudd Owen.

Winner of the primary age category

Sw Sara Mai by Casia Wiliam is a contemporary story about a girl aged around 9 called Sara Mai who grows up on her parents’ zoo, and who finds it easier to understand the behaviour of the remarkable creatures who live there than the other girls in her class.

Commenting on Sw Sara Mai, the chair of the Welsh-language judging panel, T Hywel James, said: “This is a novel that deals with contemporary issues of bullying and prejudice against people from a different ethnic background. It is a book which fills an important gap in provision for this age group and is a step in the right direction in terms of better reflecting the diverse and inclusive nature of the Wales in which we live.”

Casia Wiliam, who lives in Caernarfon, said: “I’m over the moon! I’ve been reading the work of authors who have won a Tir na n-Og Award since I was a small child, and I can’t believe that I’m in the same league as them! I’m also very proud of Sara Mai – she’s the real winner. It’s so important that young Welsh people who are black or mixed race see themselves as main characters in Welsh-language books, and it means so much to me that this book has received this special recognition.”

The other two books on the Welsh shortlist in the primary category were also highly commended by the judges – Ble mae Boc? Ar Goll yn y Chwedlau (‘Where Is Boc? Lost in the Legends’) by Huw Aaron (Y Lolfa) where a small dragon called Boc can be found hiding on each page; and Mae’r Cyfan i Ti (‘It’s All For You’) by Luned Aaron (Atebol) which introduces the wonders of the natural world to a child.

The secondary age category was won by a novel aimed at older teenagers. #helynt by Rebecca Roberts tells the story of a teenage girl and what happens to her after she misses the school bus one morning – a commonplace event but one that changes the course of her life.

Chair of judges, T Hywel James, said: “This is a story that grips the reader from start to finish and conveys some of the reality of the impact of poverty and domestic violence on a young person in contemporary Wales. A very sensitive and subtle portrait of a main character with a disability is skilfully woven into the story – but the focus of the narrative is on a brave girl, not on her disability. As a panel, we believe that this novel is an excellent if not ‘classic’ example of the young adult genre – and achieving that is no mean feat.”

Rebecca Roberts, who lives in Prestatyn, said: “#helynt is a story about loving yourself, about being different and proud of it – a message I think young people need to hear often. Rachel is dear to my heart, and I’m thrilled that the judges felt the same way about her. Winning the Tir na n-Og Award is a huge honour, and a personal high point. A massive ‘thank you’ to everybody who helped bring #helynt into being.”

Also highly praised by the judges on the Welsh secondary shortlist were Llechi (‘Slates’) by Manon Steffan Ros, about the murder of perfect, beautiful, clever Gwenno in Bethesda; and Y Castell Siwgr by Angharad Tomos (Gwasg Carreg Gwalch), about the harrowing experiences of a young slave girl working on the Penrhyn family’s plantations in Jamaica and a maid at Penrhyn Castle in Gwynedd.

Helen Jones, Head of Children’s Books and Reading Promotion at the Books Council, said: “Huge congratulations to the authors and publishers of the winning books, and to all the other fantastic titles published during 2020. Choosing two winners from the excellent volumes received in the Welsh-language primary and secondary categories was not an easy task for the judges, and that clearly shows the wealth of talent that we have across the whole of the book sector in Wales.”

Amy Staniforth from CILIP Cymru said: “We are delighted to sponsor the prestigious Tir na n-Og Awards once more this year, helping children and young people to discover great new reading experiences which reflect life through a Welsh lens. Many congratulations to the winners on their fantastic achievement and to all involved in the process of bringing these wonderful books to our shelves.”

The winner of the English-language Tir na n-Og Award 2021 will be revealed on the Radio Wales Arts Show at 18:30 on Friday, 21 May 2021. Three titles are shortlisted for the prize – Where the Wilderness Lives by Jess Butterworth (Orion), The Short Knife by Elen Caldecott (Andersen Press), and The Quilt by Valériane Leblond (Y Lolfa). The Tir na n-Og Awards books are available through local bookshops or libraries.

About the winning authors

Rebecca Roberts lives in Prestatyn with her husband and children. A former student at Ysgol Glan Clwyd and Bangor University, she graduated with a degree in English and Creative Writing in 2006. She is a translator for Mudiad Meithrin, and also holds humanist, non-religious ceremonies. Her first adult novel Mudferwi was published by Gwasg Carreg Gwalch in 2019, and was followed in early 2020 by an English novel, Eat. Sleep. Rage. Repeat. (Gomer Press). #helynt is her first novel for young people. In her free time, she likes to walk, read fiction, and like Rachel (#helynt’s main character) she loves listening to rock music.

A poet and a writer, Casia Wiliam has also adapted a number of titles into Welsh. She attended Ysgol Botwnnog before going to Aberystwyth University where she graduated in English & Creative Writing. Casia was Bardd Plant Cymru (Welsh-language Children’s Laureate) 2017–19, and Sw Sara Mai is her second original children’s novel. When not writing, she works for the Disasters Emergency Committee, a charity which raises money to help people when disasters occur in some of the world’s poorest countries.