Library of Wales: SUGAR AND SLATE

In association with Planet Books, a new edition of this seminal book of Welsh literature with an introduction by Professor Hazel V. Carby.

A mixed-race young woman, the daughter of a white Welsh-speaking mother and black father from Guyana, grows up in a small town on the coast of north Wales. From there she travels to Africa, the Caribbean and finally back to Wales. Sugar and Slate is a story of movement and dislocation in which there is a constant pull of to-ing and fro-ing, going away and coming back with always a sense of being ‘half home’. This is both a personal memoir and a story that speaks to the wider experience of mixed-race Britons. It is a story of Welshness and a story of Wales and above all a story for those of us who look over our shoulder across the sea to some other place.

It would have been so much easier if I had been able to say, ‘I come from Africa,’ then maybe added under my breath, ‘the long way round.’ Instead, the Africa thing hung about me like a Welsh Not, a heavy encumbrance on my soul; a Not-identity; an awkward reminder of what I was or what I wasn’t.

Once at a seminar, one of those occasions when the word Diaspora crops up too many times and where there aren’t too many of us present, the only other Diaspora-person sought me out. His eyes caught mine in recognition of something I can’t say I could name, yet I must have responded because later as we chatted over fizzy water and conference packs, he offered quite uninvited and with all the authority of an African: ‘People like you? You gotta get digging and if you dig deep enough you’re gonna find Africa.’

‘It is Williams’s Welshness that makes the examination of her mixed-race identity distinctive, but it is the humour, candour and facility of her style that make it exceptional . . . an engaging and perceptive voice describing an engrossing and particular personal story.’ Gary Younge

‘In its exploration of geographical, racial and cultural dislocation, Sugar and Slate is in the finest tradition of work to have emerged from the black diaspora in recent times.’ The Guardian 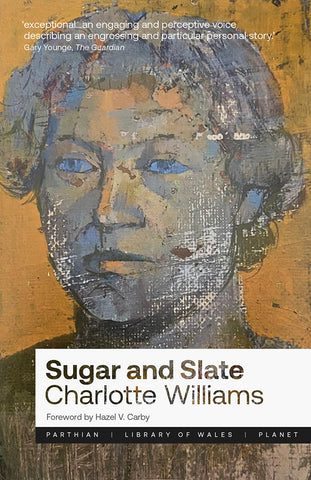